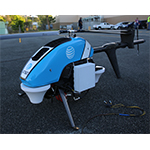 An AT&T helicopter drone is supporting wireless service in Puerto Rico, the carrier noted in a blog post today.  The company refers to the helicopter drone as a flying COW (for cell on wings).

As we previously reported, Hurricane Maria damaged a large part of AT&T’s network infrastructure in Puerto Rico and the U.S. Virgin Islands.

“In many areas, the fiber backhaul is simply gone,” an AT&T exec wrote in a previous blog post.

AT&T Helicopter Drone
The flying COW that AT&T has deployed in Puerto Rico flies 200 feet above the ground and can cover an area of up to 40 square miles, the company said in today’s blog post.

According to AT&T, the coverage area is larger than for other temporary cell sites. Carriers for years have used cellsites on wheels to provide temporary coverage in the event of outages or to support extra capacity for special events.

The AT&T flying COW is currently deployed in the San Juan area. The company said it plans to relocate the flying COW in “the coming days” to support additional areas, including the military hospital at Manati Coliseum.

AT&T isn’t the only company using a non-traditional approach to support wireless service after the recent hurricanes. Google gained special permission from the FCC to deploy balloons to support service in Puerto Rico using a technology Google calls Project Loon.

AT&T has talked about the possibility of using drones to support wireless service in the event of a disaster for some time. While the Puerto Rico flying COW is the first time AT&T has deployed a drone-based cellsite to support commercial service, the company previously used drones in Texas to inspect cellsite damage caused by Hurricane Harvey.