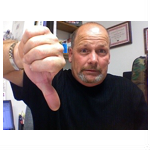 The report, which focuses on the SMB market, found that over the past six months, 83% of all business wireless customers contacted their carriers with a problem or question. That’s up from 76% in 2011. Network quality issues were the leading subject of customer complaints and inquiries. More specifically, the most customer complaints and questions had to do with connection issues, such as dropped/disconnected calls and Internet email failures.

Now in its eighth year of publication,the  J.D. Power report found that 27% of small- and medium-sized businesses (SMBs) reported problems with dropped or disconnected calls, a 30% increase from 2011, while 18% reported issues with Internet/email failure. That’s nearly double 2011’s 10%.

Business customers have more employees using data services plans, high-speed broadband plans in particular, which leads to differences in network quality issues. The rate of business segments using data plans has increased to 82% in 2012 from 67% in 2011, J.D. Power points out. Twenty-seven percent of business subscribers said they have subscribed to mobile broadband data plans this year.

Meeting business customers’ quality-of-service expectations is crucial for telecompetitors, adds J.D. Power. Of those business customers who experience network-quality issues, 34% said they were likely to switch providers in the next 12 months. That’s  nearly 3x higher than average, according to the market research firm.