Home » Covad and MegaPath to Merge 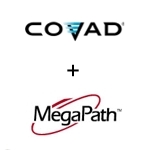 Consolidation in the telecom industry continues as Covad and Megapath announced a merger today. “This transaction brings together two industry leaders who will focus on expanding service offerings and distribution channels to further our leadership positions in the small to medium-sized business, enterprise and wholesale markets,” said D. Craig Young, MegaPath CEO and the new Executive Chairman of the combined businesses. Terms for the transaction were not disclosed and it’s expected to close, pending regulatory approvals, by the end of the third quarter 2010.

Covad has a broad footprint, with co-location in 4,400 central offices across 45 states and 240 markets, providing wholesale connectivity services to a broad range of customers. Megapath leverages a nationwide IP/MPLS network to offer a portfolio of telecom and data services to over 19,000 small, medium, and enterprise business customers. According to their press release, the merged company “…will have the largest Ethernet, DSL, and T1 footprint in North America.”

Calling themselves a managed service local exchange carrier (yet another acronym – MSLEC), the combined company will be a force in the consolidating telecom industry. Major consolidation among CLECs has been predicted for some time now and perhaps this transaction will trigger more significant CLEC mergers. Interest in acquiring/merging with CLECs expands beyond just other CLECs. Comcast has been active and so too has Windstream. Who will be next?

One thought on “Covad and MegaPath to Merge”