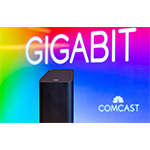 Comcast says its Gigabit internet service reach has expanded to nearly 58 million homes and businesses, which the company says makes it the largest U.S. gigabit service provider. Comcast gigabit service is enabled primarily through DOCSIS 3.1 technology, although the cable conglomerate does have some limited FTTP deployments as well.

The company added that it has doubled its broadband capacity every 18-24 months, while increasing speeds 17 times in 17 years. Today, 75% of Xfinity Internet customers choose plans with speeds of 100 Mbps or more, double the speed those customers took just three years ago, according to Comcast.

Outside the home, Comcast Xfinity Internet customers have access to more than 19 million WiFi hotspots, the company said.

X1 Platform Enhancements
The company is growing in other areas as well. We reported in August that Amazon and Comcast would launch Prime Video on the cable operator’s X1 platform, providing additional X1 OTT options by the end of the year, marking the first time that Amazon Prime Video would be integrated into an MVPD platform in the U.S., according to the companies.

Comcast is busily enhancing its X1 platform to include OTT and SVOD options, presenting customers with a single interface to access traditional pay-tv, VOD, and OTT/SVOD services. Amazon Prime Video will join Netflix and YouTube as X1 OTT options for Comcast video subscribers.