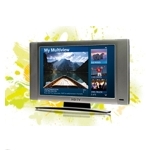 AT&T announced today U.S. Open tennis and Spanish programming versions of their Multiview TV app, which allows viewing of up to four channels on one TV screen. The U.S. Open multiview app will allow subscribers to customize their view by choosing from five different tennis matches, as well as the Tennis Channel’s main feed.

“The AT&T U-verse US Open Multiview lets viewers control what they watch at the world’s largest tennis event,” said Patrick Wilson, senior vice president, distribution, Tennis Channel. AT&T has used the Multiview app for a variety of sporting events, in hopes of providing some differentiation for their U-verse IPTV service.

In addition to these announced Multiview apps and other pre-defined Multiview options, U-verse customers can also customize their own Multiview channel, choosing up to four different channels for a single screen. They can move back and forth between these channels by selecting one for a ‘main view,’ which includes the audio of that selected channel. They can also initiate DVR functionality for any of the four channels in view on the Multiview app. AT&T does not currently charge for this value added feature.

Other TV service providers offer similar options, most notably DirecTV, who uses a similar approach (but different technology) for sporting events. CenturyLink has their own version of a multiview app, using the same technology as AT&T.