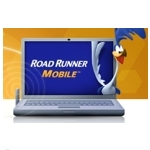 Time Warner Cable (TWC) has officially announced their move into the mobile broadband space with an upcoming December 1st launch of Road Runner Mobile in some North Carolina markets. Road Runner Mobile is a WiMAX powered mobile broadband service. TWC joins Comcast in this new mobile pursuit, as they both attempt to challenge the wireless dominance of their telco competitors.

Road Runner Mobile will initially launch in Charlotte, Greensboro and Raleigh, NC. “With Time Warner Cable’s 4G Mobile Network, we now offer the fastest mobile service available and extend our reach outside the home,” said Carol Hevey, Executive Vice President of the Carolina Region for Time Warner Cable in a press release. TWC says customers can expect speeds of “up to 6 Mbps on the fastest mobile broadband network available.”

They are offering a choice of mobile data plans, including:

TWC is one of several MSO investors in Clearwire. Others include Comcast and Bright House. Clearwire’s WiMAX network is the underlying carrier for the cable MSO 4G initiatives. Comcast has already launched their mobile broadband version, Hi-Speed 2Go in a couple markets, including Portland and Atlanta. Like Comcast, TWC is offering discounted bundles of mobile and cable modem broadband. They are also offering roaming onto Sprint’s 3G network, with dual mode USB modems.

TWC says they plan to launch “additional mobile services to customers in the future such as the ability to program a DVR from a mobile device and the ability to take their video content with them on the go.” They also outlined more mobile broadband markets to come, including Dallas and Honolulu and Maui, HI.

The addition of TWC with a 4G product makes for some interesting observations. The highly intense competitive landscape now present between cable and telco with wireline broadband and video may now move to the wireless front. Cable has its work cut out for it. Their telco competitors have close to 200 million existing wireless subscribers to leverage for their own 4G escapades. It’ll be interesting to watch.