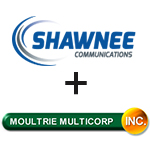 In a press release, the companies said that MITC would continue to operate as usual and that Shawnee would continue investing in technology and infrastructure.

“Shawnee Communications looks forward enthusiastically to providing Lovington with telecommunications services, high-speed Internet and customer service that is second to none,” said Shawnee Communications CEO Mike Grisham in the press release, referring to MITC’s home market of Lovington, Illinois. “We believe this acquisition will continue the legacy that Moultrie has established in Lovington, provide new opportunities for this community to connect to the world and help take Shawnee to the next level.”

While Shawnee has deployed fiber-to-the-home throughout a considerable portion of its service territory, MITC’s web page shows only DSL-based and wireless-based broadband options, with DSL topping out at 10 Mbps.

There are some differences between market segments, however. In some segments – including cable — a few companies have made multiple acquisitions. And in the broadband wireless market, Rise Broadband is playing the consolidator role.

But no major consolidators have emerged on the telco front, where most M&A activity has involved one rural service provider purchasing or merging with another.

As with most telco M&A, both Shawnee and MITC have deployed technology traditionally used by telcos, potentially simplifying the integration process. We are also seeing some mergers and acquisitions involving a cable company and a telco, however, despite the different underlying broadband technologies.