Home » New Intel 5G Modem is Single Chip Design, Will Support 4G and 5G with up to 6 Gbps Speeds 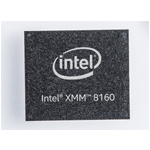 Intel also noted that the new modem chip will support a wide range of use cases, including standalone and non-standalone modes.

Standalone Vs. Non-Standalone 5G
Intel notes in a press release that both standalone and non-standalone modes are described in the 5G NR standard. 5G NR is the latest wireless standard developed by standards body 3GPP.

As technology website Mediatek explains, the non-standalone mode is designed to be supported, in part, by existing 4G infrastructure. It calls for 5G frequencies to be used for data throughput but uses 4G for non-data activities such as communicating with cell towers and servers. The earliest 5G deployments are based on the non-standalone version of 5G, which was developed to hasten those deployments.

Millimeter wave spectrum traditionally was considered unusable for commercial wireless service because it has relatively short range. But some carriers now see it as the best means of delivering the highest-speed 5G services. Both AT&T and Verizon are using millimeter wave spectrum in their initial 5G deployments.

The upshot of today’s news, according to Intel, is that XMM 8160 5G modem will give device manufacturers the ability to design smaller and more power-efficient devices.