Qualcomm today announced what it described as “the world’s first fully-integrated 5G NR millimeter wave and sub-6 GHz RF modules” for smartphones and other mobile devices – a development that should pave the way for operators to deploy service supporting maximum 5G wireless speeds. A Qualcomm spokesperson told Telecompetitor that smartphones and other mobile devices based on the new Qualcomm 5G millimeter wave components are expected to be commercially available in the first half of 2019.

In addition to operating in millimeter wave bands, the components also operate in sub-6 GHz spectrum bands traditionally used for wireless service, where initial 5G deployments are expected to occur. Qualcomm anticipates device manufacturers using as many as four miniaturized modules in a single device.

Qualcomm 5G Millimeter Wave Components
5G NR is a global standard for 5G wireless technology supporting mobile service and follows on an earlier standard focused on fixed 5G. While 5G can be deployed in a wide range of frequency bands, the highest speeds will be achieved when higher frequency and broader millimeter wave spectrum bands are used.

The downside to deployment in the millimeter wave bands is that range is considerably less than when traditional sub-6 GHz bands are used. Accordingly, wireless operators are expected to use a mixture of sub-6 GHz and millimeter wave spectrum to support their 5G deployments. 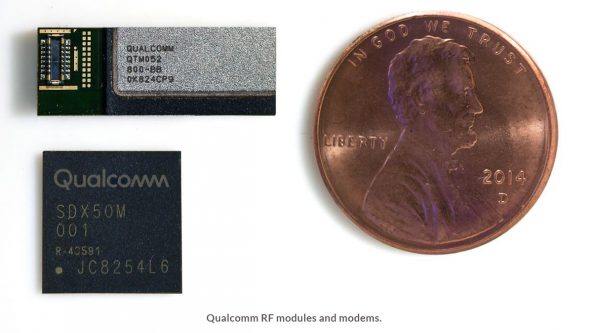 In trials using prototype devices in 400 MHz of spectrum in millimeter wave bands, AT&T achieved speeds above a gigabit per second over distances of about 150 meters (492 feet). Asked about prototype devices used for testing by AT&T and other carriers, Qualcomm referred Telecompetitor to a short video posted on YouTube just over a year ago.

Traditionally, millimeter wave spectrum was defined as including spectrum in the 30-300 GHz range, but more recently the definition has been expanded to include the 26.5-29.5 GHz bands, as well as 27.5-28.35 GHz bands. The Qualcomm 5G millimeter wave components will operate in those bands and in the 37-40 GHz bands for a total of 800 MHz of millimeter wave bandwidth, according to today’s press release.

Qualcomm’s support for the 27.5-28.35 GHz band, commonly referred to as the 28 GHz band, is important because the FCC is expected to auction spectrum in that band later this year.