Home » AT&T Chief: Cricket Will Be Our Lower-Cost Brand 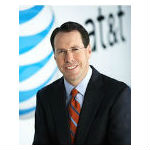 The wireless business is “going to get more competitive,” said AT&T Chairman and CEO Randall Stephenson at the Goldman Sachs Communacopia Conference this morning.

Stephenson believes AT&T’s traditional “high-end” customer base of “early adopters” will remain loyal because they appreciate AT&T’s network quality. But where the company is exposed is at the price-sensitive end of the market, he said.

“That’s one of the reasons we’re doing the Cricket deal,” Stephenson said. “We will compete very aggressively using that brand.” AT&T expects to close the deal to purchase Leap Wireless, operator of the Cricket brand, in the first quarter of next year, he noted.

“The future is about video delivery,” said Stephenson, who noted that more than 50% of AT&T’s traffic is driven by video. Stephenson pointed to the company’s Digital Life home automation offering and over-the-top as opportunities in the video realm.

The company is developing broadcast capability for its wireless network that will move popular video traffic off of the wide area network. Stephenson confirmed that the broadcast network will use the 700 MHz spectrum AT&T acquired from Qualcomm, noting that the company also is considering using an additional spectrum block so that one block would handle downstream traffic and the other would handle upstream traffic.

As for the company’s plans to retire TDM, Stephenson said the company’s goal is to have infrastructure that is “all-IP, all-wireless and all-cloud” by 2020. “The amount of cost that removes from [our] legacy [business] is dramatic,” said Stephenson.

The biggest constraint against making that move is regulatory, Stephenson said, expressing frustration at how long it is taking the FCC to move on AT&T’s request to do an all-IP transition trial. Stephenson said he is “enthusiastic” about the possibility that Tom Wheeler will take over as FCC chairman, noting that Wheeler understands the pace of telecom technology change.

On the business side, Stephenson said AT&T’s legacy services are largely tied to the number of “butts in seats” that business customers have. Because companies aren’t adding people to their payroll, growth of those services is limited, he said.

Stephenson was more enthusiastic about strategic business services such as Ethernet, VPN and IP broadband, however. Those services are growing at 15% annually, he said. He did note, however, that those services cannibalize the company’s legacy services revenues.

Other interesting information from the presentation: