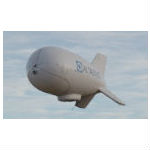 Altaeros has launched what it says is the first commercially available aerial cell tower. The SuperTower ST200 completed initial testing at the company’s southern New Hampshire R&D center. The tower is an airborne platform that uses automation and control software to stay above one spot on earth. Radios and antennas operating from this perch are more than four times higher than terrestrial towers.

The company said that testing enabled users to stream HD video at distances well beyond those of a typical cell site, even in hilly and forested New England.

The SuperTower ST200 could help in the fight against the digital device.  “There is an immense need for a better way to bring connectivity to those who have been left behind by the current generation of infrastructure,” Altaeros CEO Ben Glass said in a press release. “We’re proud to be a part of the solution that will bridge this divide.”

The ST200, which is tethered to the ground, has been in development for eight years. It is designed to work with different telecommunications vendors. It is the company’s largest and most fully functioning aerostat platform and the first to be available commercially. The automation and software control system keep the cell tower stationary no matter what the weather and other conditions, according to the company. The tethering cable conveys information to the onboard equipment, the company says.

A year ago, Altaeros said that its platforms should cost as much as 70% less than traditional solutions and have less environmental impact.

The idea of stationing a hovering craft over a spot on earth and using it for telecommunications is not new. Telecommunications companies deploy drones to supplement coverage during emergencies or at concerts, sporting events and in other situations in which normal coverage would prove insufficient. Most notably, Alphabet has been exploring the concept with Project Loon.