Home » Look! Up in the Sky. Is It a Bird? Is It a Plane? It’s a Rural SuperTower 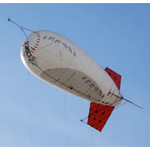 SuperTowers are essentially industrial blimps outfitted to take the place of as many as 30 conventional cell towers but providing larger coverage areas. Late last year, Altaeros partnered with Ericsson on a demonstration of its SuperTowers featuring streamed video over LTE  in rural Maine.

Rural SuperTowers
Altaeros said that the platforms, which technically are called aerostats, can be deployed six to eight times higher than cell towers and therefore offer dramatically large coverage area. The Altaeros solution should cost as much as 70% less than traditional solutions and have less environmental impact, according to the company. In addition, network operators have considerably more flexibility in where SuperTowers can be placed.

“People living in rural areas often have limited or no access to high-speed broadband. With Ericsson’s innovative radio technology installed on the SuperTower, we aim to change that and help provide these consumers access to the benefits of affordable broadband, such as health care, education, and economic growth,” said Ben Glass, Altaeros’ CEO and CTO in a press release.

The SuperTowers use the same handsets, radios, antennas and permitting processes as traditional towers. The SuperTowers accommodated Ericsson’s 5G-ready high performance radio system with MIMO-capable radios, according to a press release.

Using blimp-like craft to aid in telecommunications is not a new idea. For instance, Google parent Alphabet has been working on Project Loon, a balloon satellite system, for several years. It is being used in Puerto Rico as the island continues to recover from Hurricane Maria. Related approaches, such as drone helicopters – called cellsites on wings, or COWs — also are gaining attention.

Altaeros’ SuperTower also can be used for emergency or special event coverage. It seems, however, that the real driver is to serve extreme low density areas on an ongoing basis.