Agricultural drones could conserve up to 90% of water usage for irrigation and reduce chemicals required for crop spraying between 30% and 50%, according to Ipsos Business Consulting. Potential benefits such as these drove investment in agricultural drone technology to increase 344% between 2013 and 2015, researchers said.

All this could be good news for wireless service providers serving rural areas.

Scherer added that some drones have an app so that “you can basically control the drone with your mobile phone.”

Use Cases for Agricultural Drones
Ipsos Business Consulting’s research on agricultural drones is summarized in a white paper titled “Commercial Drone Adoption in Agribusiness,” which notes that estimates call for a global commercial drone market of $2 billion to $6.5 billion by 2020. Agricultural drones could represent as much as 80% of that market, according to some forecasts.

Agricultural drones can be useful for a wide range of crops, the white paper notes. This includes crops such as corn and grains that are typically serviced by industrial agricultural machinery, which could be supported by crop imaging from the drones.

In addition, drones could support precision agriculture for specialty crops such as grapes. Precision agriculture uses detailed information about crop yields to determine how much seed and fertilizer to apply to different portions of a farmer’s acreage.

In the U.S., agricultural drones are already in use for crop dusting efficiency over large fields and for farm management using precision agriculture, the authors note.

Drone imaging is less costly than imaging by satellite or manned aircraft for fields smaller than 20 hectares (about 49.4 acres), researchers note. In addition, remote control of agricultural drones exposes farmers to fewer chemicals. 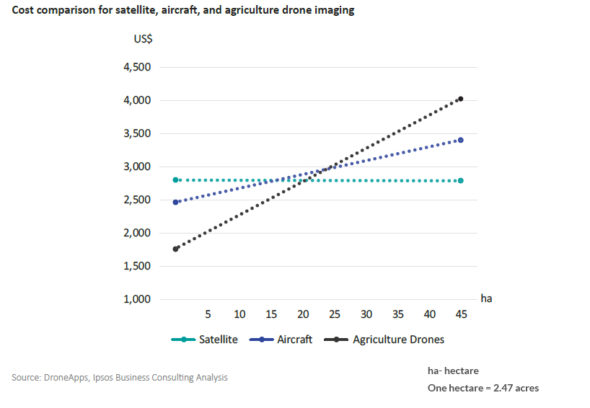 The “common path,” he said, is “drone-to-end user for flight control and also for imaging, depending on the size/ amount of data that is being collected.” He noted that drone operators can watch images on a mobile device as they are captured, but the data is typically stored on the drone.

“That means that it is necessary to retrieve the drone once the storage device is full,” Scherer commented.

One potentially important application for remote connectivity of agricultural drones is in maintenance and repair, he noted. In this application, a maintenance expert in a centralized location would review images in real time to assist an on-site drone pilot.

He added, though, that “This is currently limited due to infrastructure constraints on the data transfer.”

Agricultural drones could get a boost from the upcoming Connect America/ Universal Service mobility fund, which will cover some of the costs of deploying wireless service in remote rural areas where connectivity is not currently available.  Initial plans for the mobility fund targeted roadways, but earlier this year the FCC adopted rules that call for funding to be targeted more broadly to unserved areas – a decision aimed at supporting applications such as precision agriculture.