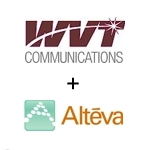 Warwick, NY based independent telco WVT has closed on its $17 million acquisition of Philadelphia based Alteva and has outlined the management structure of the two companies. Alteva will join existing WVT subsidiary USA Datnet to execute WVT’s CLEC and cloud strategies.

“This strategic move will help the newly merged company significantly strengthen its CLEC business, and expand its cloud strategy for unified communications and hosted applications for small, medium and large enterprise customers,” announced WVT in a press release.

Current WVT CEO Duane Albro will remain in that position. Current Alteve CEO David Cuthbert will become COO of WVT and President of the CLEC/cloud subsidiaries of Alteva and USA Datanet. Virginia Quackenbush will become president of Warwick Valley Telephone Company, overseeing the legacy ILEC operations. Other management appointments were announced and can be viewed here.

WVT joins a host of telecom service providers looking to take advantage of the emerging cloud and managed services opportunity by acquiring companies who specialize in it. Within the independent telco community, WVT’s acquisition of Alteva demonstrated that this cloud M&A activity reaches beyond just large tier 2 providers like Windstream and TDS. There have been several other smaller transactions in the space as well, as telcos of all sizes look to beef up their cloud and SMB services portfolio as a revenue diversification strategy.