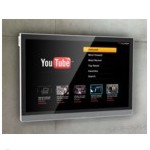 It didn’t take long for the first TV featuring Google’s Android operating system to surface. The HD LCD TV is made by European manufacturer People of Lava (PoL) and comes in 42”, 47”, and 55” varieties. The Android TV is called Scandinavia and PoL calls it a ‘Window to the World.’

The Internet connected TV offers a variety of applications including Facebook, Twitter and YouTube apps, Gmail integration, and Google Maps among others. The TV also offers a web browser. It’s the latest incarnation of the heretofore failed web TV experiment.

Because its Android based, it can conceivably access the thousands of available Android apps, most of which are built for mobile devices. So the jury is out, at least for now, as to whether that’s even a desirable feature.

The TV has a processor on board – an expensive feature which caused Panasonic to turn down an Android TV platform, at least for now. It also comes with a wireless keyboard. Android for the TV is Google’s attempt to capture the television screen and its search and advertising potential to add to its domination of the computer and growing share of the smartphone market. Think of Android TV as a Google powered middleware for an Internet connected TV.

So I’m interested in the Telecompetitor community’s opinion on this. Is this just another web TV experiment that will fail, or will Google get it right with Android and produce an apps enabled TV that the masses will eventually adopt?

5 thoughts on “There’s Been a Google TV Sighting”