Home » SureWest to be Acquired by Consolidated Communications 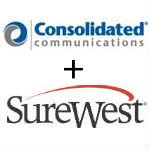 California based SureWest Communications has agreed to be acquired by Illinois based Consolidated Communications for $340.9 million, exclusive of debt. The move highlights ongoing consolidation in the telecom sector. Both companies currently operate in multiple states and the combination will create a decent sized tier 2 operator with operations in six states and approximately 1,775 employees.

Given SureWest’s history and higher profile, you could have suspected the reverse for this transaction, with them acquiring Consolidated. But Consolidated also has a history of growth via acquisition, most recently purchasing North Pittsburgh Systems in 2007 for $363 million.

“SureWest has built one of the highest quality networks in the industry and transformed itself into a leading broadband provider. The combined company will create a broader platform from which to expand our products and services to meet the demands of our customers. We look forward to working with the SureWest employees to grow the business,” said Bob Currey, Consolidated’s President and Chief Executive Officer in a press release

As of the past twelve months, the combined entity had revenues approximately $620 million. SureWest currently serves 130,000 residential subscribers and 15,700 commercial businesses in the greater Kansas City and Sacramento regions. Consolidated, as of September 2011, had approximately 315K access lines (ILEC and CLEC), 109K DSL lines, and 33K IPTV subscribers.

The two mid tier carriers are very active in the IPTV arena, and the acquisition gives Consolidated a significant FTTP network. Telecom carriers of all sizes are bulking up through acquisition to take better advantage of scale in an IP/broadband world, as traditional voice access lines continue to decline.

“Both Consolidated and SureWest have a long history of delivering the highest quality products and services to its customers,” said Steve Oldham, President and Chief Executive Officer of SureWest in a press release. “From a customer perspective, the transaction creates scale by combining our proven capabilities in delivering leading edge digital TV and broadband services as a stronger, more competitive communications company. We believe the transaction is in the best interests of our company, our customers, our communities and our shareholders.”

The transaction still requires approval from shareholders of both companies and customary state and federal regulatory agencies.