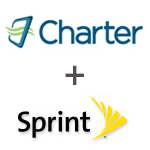 Softbank, the majority owner of Sprint, is in talks about a possible Sprint Charter merger, according to a report from the New York Post.

Sprint Charter Merger?
According to the New York Post report, which quotes two unnamed sources, the Sprint Charter discussions may be at an early stage but include high-level executives.

Sprint has been struggling in a competitive wireless market and while some might say that a merger with rising wireless company T-Mobile would have been the best move, Softbank reportedly was unwilling to give up control of the merged entity.

Charter last year completed a major merger of its own with two other cable operators — Time Warner Cable and Bright House.

The main motivation for a Sprint Charter merger would be for the companies to gain an edge and improve their economics in an increasingly converged market in which video viewing is becoming increasingly mobile. Charter already has a deal to resell Verizon wireless and has considerable Wi-Fi resources to support a hybrid Wi-Fi/ cellular offering. But economics would be improved if the company had its own cellular network.

Meanwhile, companies whose primary focus is on communications each seem to be taking their own path as video takes on greater importance. Verizon’s AOL and Yahoo purchases were focused on advertising opportunities with content secondary, while AT&T bought DirecTV and is seeking to buy Time Warner primarily to gain their content, with advertising offering secondary opportunities.

A merger with Charter potentially could open up both content and advertising opportunities for Sprint. The question is whether that would be the best opportunity for it to gain badly needed wireless market share.

3 thoughts on “Report: Sprint Now in Talks with Charter (Again) for Possible Merger”