Selling online is often viewed as a way for small businesses in rural areas to generate income beyond their home turf. But a new report from the Institute for Local Self-Reliance found major challenges for a small business selling online, including numerous challenges that stem from Amazon’s strong presence in the online marketplace.

The vast majority (93%) of small businesses surveyed said Amazon has negatively impacted their revenue, including more than half that said the degree of impact was “significant.” 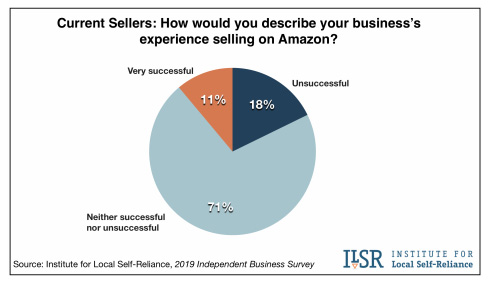 Asked what factors make it hard to succeed on Amazon’s platform, the top response (cited by 60% of respondents) was “the size of the fees for selling on Marketplace,” followed by “competition from other third-party sellers” (cited by 55%) and “Amazon sells the same products and competes against me” (35%).

Among those respondents that stopped selling on Amazon’s Marketplace, the top reason for stopping, cited by 57%, was “the size of the fees meant my products were not price-competitive or profitable.” The next three most common answers were “My views about the company led me to want to stop doing business with it” (43%), “It generated too few sales to be worth it” (38%) and “Amazon sells the same products and competes against me” (35%).

Among those companies that have not sold on Amazon, the vast majority (89%) said they are unlikely to join the platform in the next year. Among those who are likely to join Amazon’s Marketplace, the most common reasons were “More of my customers are buying on Amazon” and “Traffic on my business’s website is down.” Both responses were cited by 40% of respondents likely to begin selling on Amazon.

Just under two thirds of respondents (62%) said they had spent marketing dollars on Amazon, although Amazon advertising represented less than 1% of respondents’ total marketing budget.

Not surprisingly, more than two-thirds of respondents (70%) said regulators should investigate Amazon’s market power and behavior, with only 6% disagreeing.

Another finding from the ILSR survey, titled “2019 Independent Business Survey,” that would be of interest to Telecompetitor readers relates to economic development incentives that businesses may receive to locate in an area.

The survey had more than 1,000 respondents from a wide range of industries, including businesses located in urban and rural areas.