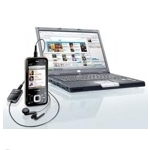 Nearly two-thirds of U.S. Internet users have made on-line purchases of “intangible” products such as software, articles and music, according to new research from the Pew Internet & American Life Project.

In the survey of Internet users conducted late last year, respondents were asked about 15 types of on-line content. The most popular types of content purchased were digital music and software, each of which had been purchased by 33% of respondents. The next most popular categories were cellphone and tablet computer applications (cited by 21% of respondents), digital games (19%) and digital newspaper or magazine articles or reports (18%).

The average expenditure for those who have paid for content was approximately $47 a month. The researchers cautioned, however, that “some extremely high-end users pull the average higher, with most purchasers spending about $10 per month.”

Although service providers’ act as a “dumb pipe” in distributing content in most of Pew’s 15 categories, they likely received at least a portion of the money spent in at least two categories—cellphone apps and ringtones.