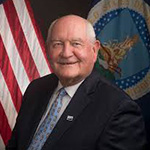 Agriculture Secretary Sonny Perdue didn’t have many new details to share about the upcoming $600 million USDA rural broadband pilot when he addressed stakeholders at a USTelecom event today. But his comments suggested that could change soon.

“I’ve challenged my people to have a solid plan in place by the end of the year,” said Perdue.

He also noted that “we are close to determining the rules but we’re not there just yet.”

USDA Rural Broadband Pilot
Congress allocated $600 million for the USDA rural broadband pilot in the spending bill adopted earlier this year. The bill calls for funding to go toward communities with populations of 20,000 or less where at least 90% of the households in the project area cannot get broadband at speeds of at least 10/1 Mbps but other details, such as the target minimum buildout speed and how funding recipients would be determined have not yet been released.

Perdue noted that USDA received more than 250 comments from stakeholders in response to the agency’s request for input on the pilot program. The deadline for filing comments was September 10 and Perdue said the agency is using those comments in developing rules for the program.

Back in August, USDA Senior Advisor for Rural Infrastructure Jannine Miller offered a few hints about the rural broadband pilot. She noted, for example, that while the USDA traditionally was able to offer loans or grants but not a combination of the two, that could change with the pilot program. The idea that some funding might come in the form of a loan is consistent with Perdue’s comment today that USDA would seek pilot program participants that “have skin in the game.”

At the USTelecom event today, Perdue reiterated the notion of the farm as business, stating that the pilot program would “address the needs of farms, not just homes.”

He spoke enthusiastically about precision agriculture as an example of “real American ingenuity” and as a means of improving agricultural productivity that ultimately could help feed the world but added that this vision would require broadband connectivity.

Intriguingly, he also referenced the possibility of using blockchain technology to give a small family farmer the ability to track crops from the field to the marketplace, including customers around the globe. This application also could help keep the food supply safer, he said.

The pilot program will be technology neutral and will be open to a range of potential participants, Perdue noted. He specifically referenced telecom companies, electric companies and partnerships between the two as potential funding recipients.