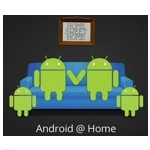 Google is conducting their annual developer’s conference, Google I/O, in San Francisco this week. Google makes a flurry of announcements for upcoming products and services during this confab, and one that caught my eye is Android@Home.

There is an ongoing rush to digitize the home — that is —  link all of the devices, appliances, and energy management systems into a broadband connected network which can be monitored, controlled, and enjoyed in new and exciting ways. The in-home wireless network used to connect computers and computer peripherals was the first stage in this trend.

But the future will take that concept into a brave new world, where virtually everything in the home is connected – think of it as a manifestation of that old cartoon, the Jetsons. Beyond the ‘cool factor’ and convenience the digital home will enable, it will also have profound implications on important issues like energy conservation and home health care.

Google sees this vision and is looking to get an early start with Android@Home – the operating system for your home as they described it. The Android@Home framework is a developer kit which will allow Android developers to build applications that help manage the digital home. In the below video, Google demonstrates several Android@Home applications, including the ability to turn lights on and off with hand gestures (with the other hand accessible to your phone or tablet of course) and instantly download and play music on any connected A/V device in the home.

One feature of Android@Home is its ability to connect devices that don’t ship with Wi-Fi connectivity. Android@Home will use a protocol that ‘talks’ to these devices via their electrical connection. That opens up the possibilities tremendously, to include many more devices in the home including appliances and even your alarm clock.

Google doesn’t currently plan to directly market a digital home service. Rather they are opening the Android@Home framework to the developer community in the hopes that it takes off and many new digital home applications are brought to market as a result. It’s the same approach they used with the Android mobile operating system, which resulted in a robust ecosystem around Android based mobile phones.

Of course, Google has bigger aspirations for Android than just the mobile phone, and now the home. Google hopes Android will become your ‘life’ OS.

There are other developing digital home ecosystems in play. We are at the very beginning of this ‘Jetsons’ transformation of the home, and broadband service providers will have a role to play. The digital home business opportunities, while not yet well defined, have great promise for the future.