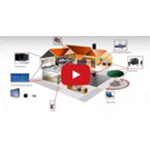 One common challenge in today’s emerging gigabit broadband environment is extending that ultra-broadband experience throughout the home through gigabit home networking. After all, what good is ultra-broadband service if it only makes it to the side of the home? Enter G.hn, which aims to leverage existing home wiring, including in-home powerline wiring, to establish a backbone for gigabit home networking.

HomeGrid Forum president Donna Yasay provided an update of G.hn and its progress at Telecompetitor’s recent broadbandTV event. That progress includes a big push into retail, to provide plug-and-play G.hn certified products that ultimately provide the necessary backbone to get WiFi distributed throughout the entire home.

“We actually just recently launched with ARRIS in retail in the last couple months and they actually built our technology into a router and gateway,” said Yasay. “From a powerline standpoint, you’re going to have to plug that router [in] anyway into a power cord, [you] might as well light up that power cord with home networking.”

In this example, an ARRIS router/gateway can establish a high bandwidth network throughout the home via electrical wiring and a WiFi extender that also has to be plugged in for power anyway, can be easily networked with the router/gateway using the home’s electric wires.

“We’re giving powerline new life,” says Yasay. “We like to call ourselves the Tesla of powerline, we’re still a car but we run better, more efficient, and we have higher performance.”