Broadband providers are not required to use a new broadband label announced today by the FCC. But mobile and fixed service providers who voluntarily choose to use the new labels would be able to meet Net Neutrality transparency requirements, commission officials said today.

“The Open Internet Order requires ISPs to disclose critical factors to consumers,” said FCC Chairman Tom Wheeler at an announcement event today that was also webcast. “What we are unveiling is a simplified approach to the information that consumers need to make an informed purchase decision.”

The commission shared samples of two different labels – one designed for mobile offerings and the other designed for fixed offerings. Both labels include information such as monthly data allotments, activation fees, typical upstream and downstream speeds, and typical latency and packet loss. 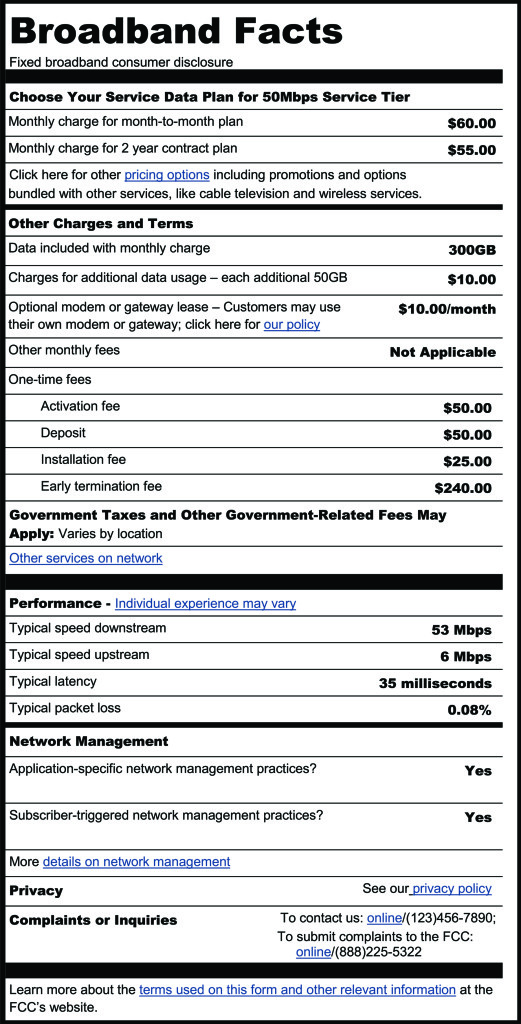 As Wheeler noted, the labels are “designed to be used at the point of sale and online.”

Behind the New Broadband Label
When Net Neutrality guidelines were initially introduced several years ago, they required fixed and mobile operators to disclose information about network management  policies to consumers, content providers and device manufacturers. And even when an appeals court struck down some of those guidelines until the FCC reclassified broadband as a communications service, the transparency requirements remained in place – and they were reiterated in the stricter Net Neutrality guidelines adopted just over a year ago at the time of broadband reclassification.

I would expect to see the new broadband label adopted widely by broadband providers once the Office of Management and Budget gives final approval to them, simply because doing do provides the providers with what lawyers call “safe harbor” with regard to Net Neutrality transparency requirements.

According to the FCC, the actual prices paid for broadband-related services can be as much as 40% greater than what is advertised after taxes and fees are added to the bill. The new broadband label should help reduce the number of consumers who experience that type of sticker shock.