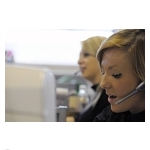 Rural communities could be big beneficiaries of a goal set by a new coalition of a dozen call center organizations to create 100,000 new U.S. jobs within two years, including 17,000 home-based jobs.

“Today’s announcement wouldn’t be possible if it weren’t for the leadership of these forward-looking business leaders who are willing to make the investments to bring jobs home and create new ones,” said FCC Chairman Julius Genachowski at an event to announce the new initiative, dubbed jobs4america, in Jeffersonville, Ind. yesterday. “And today’s announcement wouldn’t be possible without one more thing: broadband—high –speed Internet.”

The event took place at a call center facility operated by jobs4america member company Accent, which plans to support 175 new workers—and Genachowski noted that “almost all of the operations” of the facility rely on high-speed Internet, including processing transactions, making VoIP calls, accessing records and information, and other tasks.

According to the coalition’s plan, home workers also would need broadband, which would be used to access cloud-based support software to enable home-based call center agents to perform the same functions as centralized workers.

“Many of the jobs we’re announcing today will be at-home positions—jobs for people with disabilities who can’t make it into an office, jobs for stay-at-home parents who need flexible schedules, jobs for veterans returning from war and transitioning back into the economy,” said Genachowski.

Home-based jobs also are well suited for rural workers, said Accent CEO Tim Searcy at the Jeffersonville event. People in rural areas are “well educated and have a strong work ethic,” Searcy said. Often, he said, they want to stay close to home but have to move away to find jobs.

As new jobs are created, they also should have a “ripple effect,” generating new jobs in an area to support the new call center workers, Searcy said.

According to an announcement issued today by the FCC, the coalition expects many of the new jobs it hopes to create to be brought on-shore from other countries. Bringing a call center job back to the U.S. from overseas can save companies about 15% when the “full picture” is considered, according to a recent study by jobs4america member company Novo 1.

A fact sheet issued by the FCC also cites a BDO USA survey of 100 chief financial officers, which found that just 12% of firms currently maintain offshore contact centers or help desks, down substantially from 35% in 2009 and 19% last year.

Genachowski took the opportunity to promote several of the FCC’s key initiatives, including refocusing the Universal Service program from voice to broadband and freeing up additional spectrum for mobile broadband through a voluntary incentive auction.  “I hope Congress soon passes this broadly supported, bipartisan initiative,” he said.