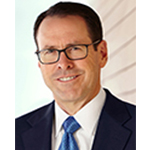 About an hour after news headlines such as “DOJ files to block AT&T Time Warner merger” began to hit, AT&T CEO Randall Stephenson was on a conference call with reporters assuring them that the deal would be approved without a requirement to divest assets.

Stephenson continued to argue what AT&T has maintained since merger plans were announced over a year ago – that the deal is a classic vertical merger that would combine two companies that don’t compete with one another. Asked about rumors that the DOJ suit was triggered by White House dissatisfaction with Time Warner property CNN’s news coverage of the current administration, Stephenson said, “Frankly, I don’t know.”

He added, though, that AT&T “cannot and will not be party to any agreement that [would] compromise First Amendment protection” and that divesting CNN “is a non-starter.”

He also noted that the DOJ has not filed suit over a vertical merger since the Carter administration, when the court ruled against the DOJ.

“Consistent application of law is critical,” Stephenson said. He added that “when the government discards decades of legal precedent,” AT&T felt it had to fight the suit in order to maintain “confidence in government.”

AT&T representatives said the company wants the trial to take place as soon as possible, potentially in as soon as 60 days.

The suit positions AT&T as a “distributor” and Time Warner as a “content programmer” and quotes concerns cited previously by AT&T that distributors that control popular programming “have the incentive and ability to use . . . that control as a weapon to hinder competition.”

According to the AT&T representatives, those comments were taken out of context. They were made at the time Comcast was seeking to acquire NBCUniversal and did not seek to block the merger but only to ensure that certain conditions were applied to the merger.

That merger ultimately was approved when the merged company agreed to license programming to online competitors, to subject itself to anti-retaliation provisions and to adhere to open internet requirements.

AT&T representatives said they had expressed a willingness to comply with certain conditions to gain approval to merge with Time Warner. Although the representatives declined to provide details, they said they would be similar to those that traditionally apply in such situations, suggesting that the conditions would be similar to those that applied to Comcast and NBCUniversal.

In a press release,  AT&T argued that the merger would have the opposite impact on technology in comparison with what the DOJ argued in its release. The carrier said the merger would “help make television more affordable, innovative, interactive and mobile.”