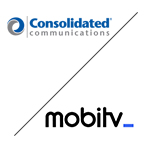 Consolidated Communications, Inc. officially announced its collaboration with MobiTV for the new CCiTV service, which uses a cloud-based app-delivered approach.

Windstream made a similar move with MobiTV earlier this year, as Telecompetitor reported.

“We’re pleased to play such an integral role in Consolidated’s new offering and proud to bring the future of television to their subscribers,” said Charlie Nooney, CEO and Chairman of MobiTV, in a prepared statement. “The customizable MobiTV platform, combined with the fiber-optic network and customer service from Consolidated Communications, makes for a powerful app-based TV solution that prioritizes the user experience.”

The platform uses IPTV and a “bring-your-own-device” method of service delivery, so that customers don’t need additional hardware or set-up fees.

“CCiTV goes well beyond basic television services to provide next-gen streaming TV with the modern features our subscribers want,” said Rob Koester, vice president of consumer product management at Consolidated Communications, in a prepared statement. “Partnering with MobiTV allows us to deliver a cost-effective next-generation TV service and enhanced user experience. Consolidated also benefits from MobiTV’s IP delivery, which reduces the capital expense associated with additional hardware in the home and the ability to transition to the service without a major rip-and-replace installation.”