Home » BroadbandVision: Practical Advice, a Glimpse at the Future 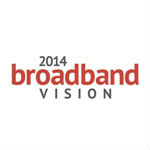 The BroadbandVision conference in Las Vegas this week offered network operators the opportunity to share business tips with one another and to learn about new business and technology developments heading their way.

The event brought together large and small broadband service providers, with a wide range of stakeholders, including Windstream CEO Jeff Gardner, NTCA – The Rural Broadband Association CEO Shirley Bloomfield, Verizon Manager of Business Development Adam Lippman and others taking the stage to share their advice and knowledge. Breakout sessions were organized into tracks on video and entertainment, cloud and enterprise and broadband, enabling attendees to focus on specific areas of interests.

A Glimpse of What’s to Come
Among those offering up their vision of the future at Broadband Vision were Bill Gerski, vice president of broadband equipment manufacturer Huawei Technologies; NISC CEO Vern Dosch; and Rouzbeh Yassini, executive director of the University of New Hampshire’s Broadband Center of Excellence. Shannon and Lippman also had something to say about what’s to come.