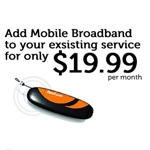 BendBroadband has deployed a 3G HSPA+ wireless network, which they say delivers 15 Mbps under optimal conditions, and average download speeds, depending on customer location, of between 6 and 8 Mbps. Both T-Mobile and AT&T are currently building HSPA+ networks, with limited availability in certain markets.

They also intend to use the wireless network to offer a double play of voice and broadband to homes. “With this new wireless technology, BendBroadband will also reach homes inside their cable footprint which have not been economically feasible to serve via traditional fiber-coax cable infrastructure,” they say in a press release.

It’s the same strategy being pursued by their larger cable brethren, Comcast and Time Warner cable, with their recently launched WiMAX offerings. Bundle mobile broadband with home wireline broadband to create a differentiated broadband product. For some customers, BendBroadband will use all wireless infrastructure to create this fixed-mobile bundled approach.

This BendBroadband move also illustrates that the move to wireless and mobile broadband within the cable MSO community is in full swing and is not just limited to the national players.

One thought on “BendBroadband Claims Fastest Mobile Broadband in U.S.”