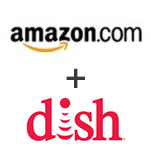 A long rumored potential Amazon Dish partnership is gaining more attention, thanks to a Wall Street Journal/Dow Jones report. The two companies share disruptive pedigrees and both have eccentric chief executives, and may have assets that the other could leverage.

Dish has a boatload of wireless spectrum and a need to put it to use. Building a nationwide wireless network with that spectrum is an expensive proposition and going it alone could prove risky. Amazon has business interests in numerous industry verticals and given the right circumstances, could leverage a nationwide wireless network for much of them. They have significant financial horsepower as well.

The WSJ report cites Amazon’s growing interest in IoT. They’re keen on using drones for package delivery as one example. But they also have a very loyal subscriber base with Amazon Prime that numbers in the tens of millions. They’ve already added video to the mix for this subscriber pool, why not wireless?

Dish has acquires $22 billion worth of spectrum, according to the WSJ report. They recently announced a plan to build an IoT focused wireless network, in part to help satisfy FCC requirements to build out a network by 2020.

The rumors of an Amazon-Dish are not new. They have been circulating for some months now. A tie up between the two makes good logical sense. In addition to the wireless interests, there are space interests as well. Amazon CEO Jeff Bezos is also a space entrepreneur, with Blue Origin. Dish CEO Charlie Ergen is no stranger to space based business models, having helped disrupt the pay-TV industry with satellite based DBS.

For now, this is an exercise in pure speculation. No deal is imminent. At best, the WSJ article points to several meetings between Bezos and Ergen over the past months. Combine that with the logic of the two being a possible good fit, and rumors of a potential tie up persist.