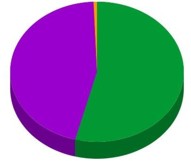 An important milestone was reached for the first time last quarter. Telcos like AT&T and Verizon collectively added more video subscribers than DBS providers. AT&T and Verizon collectively added 411K new video subs, while DirecTV and DISH added only 310K. DBS has historically been the leader in new net video subscriber additions for the past few years, mostly at the expense of cable companies. Expect that trend to change. TelcoTV providers will probably take that quarterly “growth crown” for the next few years, as they ramp up their triple and quad play offerings. In fact, as Investors Business Daily accurately points out, telcos haven’t even begun rolling out in the largest cities yet. As they do, their growth rates should accelerate. Verizon’s recent news about offering FiOS in New York City, should it actually materialize, will be a good indicator on the growth impact caused by extending their reach into larger cities.

Interestingly enough, DBS providers are taking a double hit from the telco’s video progress. A good portion of the new telco video adds are coming at the expense of DBS, as evidenced by DISH’s poor first quarter for net new adds. In addition, telcos are slowing down there DBS resale efforts (AT&T – DISH and Verizon – DirecTV), as they ramp up their own video efforts. Those telco resale arrangements have been a good source of growth for DBS providers. As their telco partners get distracted with their own video launches, DirecTV and DISH will have to work much harder to replace those lost resale additions. Part of DirecTV’s strategy is to try to attract higher value subscribers with advanced feature portfolios and more robust HD content packages, hoping their higher ARPU will help replace revenues lost by smaller gains in net new subscriber additions.