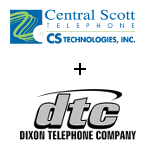 Rural telecom consolidation continues with an announcement yesterday involving two incumbent rural Iowa carriers. Central Scott Telephone Company,  a subsidiary of LICT Corporation, is purchasing Dixon Telephone Company. LICT expects to see synergies from combining the personnel of the two companies, which are adjacent to one another, said LICT Executive Vice President and Chief Financial Officer Robert E. Dolan in an interview. LICT has been acquiring rural telcos since 1989 and currently has 15 in its portfolio. The company has public shareholders and is traded over the counter.

Rural Telecom Consolidation
LICT will continue to look at acquisitions in the rural telecom market, Dolan said. “In this day and age we are more focused on acquisitions closer to our current systems,” said Dolan. “We would also look at fiber and cable companies.” Dolan noted that the rural telecom business is more challenging now than it was in the past. That and other comments he made will be familiar to anyone involved in rural telecom. “We’re looking to re-balance our mix,” said Dolan. “We still want to be the premiere [telecom provider, but we also] want more non-regulated streams. We want to be less dependent on government funding mechanisms. We will [continue to] build up infrastructure, expand our revenue base and we will look at acquisitions.” Dolan added that “We like Iowa – we would like to do another deal there.”

According to an LICT press release, Dixon Telephone company shareholders approved the acquisition by Central Scott Telephone Company on a nearly unanimous basis. Financial details of the Dixon/ Central Scott deal were not released.  LICT expects to have revenues of $87 million for 2015. As of June 30, the company had 28,000 ILEC voice lines, 5,000 CLEC lines, 27,500 broadband lines, and 6,000 video customers.