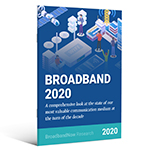 Broadband Deployment Growth by State
Montana saw the greatest improvement, with broadband availability increasing from 11% to 86% between 2010 and 2020 – a 652% growth rate. Other states seeing big gains were Vermont (412%), Arkansas (117%) and West Virginia (109%), according to the report, titled “Broadband 2020” and based on data from public and private sources.

In contrast, some states that started at lower availability levels had growth rates below 15% over the 10-year period. States in this category were more heavily rural, including Oregon, Utah, and Nevada, suggesting that these states may have difficulty maintaining momentum as only the most difficult areas to reach remain unserved.

The authors argue, however, that the economic benefits of greater broadband availability would pay for itself in just a few years. According to the authors, more ubiquitous broadband could generate $60 billion to $80 billion for rural economies by, for example, supporting online commerce for small businesses and offering new employment opportunities.

Although it sounds like a big number, the authors back up their argument by pointing to a range of research on broadband’s impact on rural economies.

Check out the report, including the state-by-state list of broadband deployment gains between 2010 and 2020 at this link.