Home » Parks: 14% of Smartphone/Tablet Users Have Used a TV App 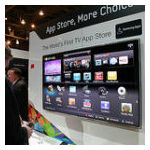 Demand for TV-content applications is on the rise as greater numbers of smartphone and tablet users look to make use of them. Some 14% of smartphone/tablet users surveyed in 1Q 2013 had recently used a TV-content app, either from networks, such as MTV, Nickelodeon or USA Network, or for shows, such as Glee and The Walking Dead, according to a new report from Parks Associates.

Seventy-five percent of those who said they had used a TV-content app said they were satisfied with the app experience, Parks researchers found in conducting market research for the firm’s “TV Channel and Network App Users” report.

Watching video, looking up program-related information and purchasing related music or merchandise were the most common activities for which TV-content apps were used. Viewers were also using them to find information on broadcast dates and times.

“The latest round of apps is from content providers, not satellite and cable-TV companies,” Parks’ director, consumer analytics John Barrett elaborated. “They want to increase viewer loyalty to their shows and enhance the viewing experience with second-screen activities, and it is working, especially among Millennials. This ‘second-screen’ generation is accustomed to consuming content on multiple devices.”

Millennials are much more interested in program and channel-specific apps than older age groups, according to Parks. Shows targeting Millennials would therefore do well “to develop a robust app offering where viewers can watch show-related videos and virtually tour show locations.

“Companies in the television industry are experimenting with several approaches to TV-related apps for mobile devices,” Parks’ director, research Brett Sappington commented. “Some are already noting several benefits, including greater viewer immersion, the ability to appeal to viewers outside of the broadcast window, and new aspects to storytelling.

“However, the most important implication may be for advertising. As consumers increasingly tune into mobile devices during commercial breaks, these apps provide a way to keep viewer attention.”