Home » Nielsen Explores Where We Watch TV, Use Gaming Consoles

Eighteen-to -34 year-olds may be famous for their voracious appetite for Internet connectivitiy. But as Nielsen researchers observe in a recent blog post,  those in the 12-17-year-old age group have more of an appetite for gaming.

The 12-17 demographic “represent an outsized share of game console usage, more than triple that of their share of TV or DVR usage,” according to a May 17 Nielsenwire blog post. They’re also prone to playing just about anywhere in the home, including basements and garages.

More than half (52%) of 12-17 year-olds’ gaming time is spent with a gaming console, and in either non-traditional spaces or bedrooms, while they spend 48% of their gaming time in more social environs, such as a living or family room, according to Nielsen research.

Being teens, 12-17 year-olds also spend a lot of time watching TV, and they’re spending about the same amount of time doing so in bedrooms as they are in family rooms. Teenagers spent 47% of their total TV viewing time in their bedrooms as compared to 48% in family rooms, Nielsen found.

In contrast, 35-64 year olds spend 62% of time watching TV in shared spaces and 31% in the bedroom. Adults 65 and older spend most of their time watching TV (69%) in a family or living room. 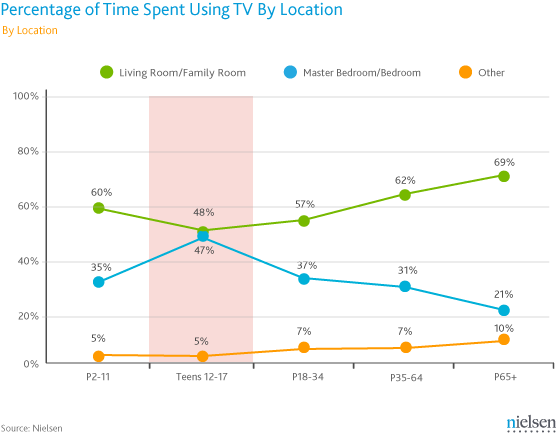