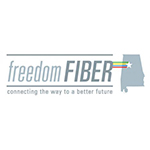 U.S. Department of Agriculture Secretary Sonny Perdue was on hand for the announcement yesterday that Tombigbee Communications was awarded a $2.98 million grant for a rural utility broadband deployment in Alabama. In an interview with Telecompetitor, Steve Foshee — president and CEO of Tombigbee Communications and its parent company Tombigbee Electric Cooperative — explained that the funding is for one of the most remote parts of a broader area that the company has targeted for broadband deployment.

Deployments such as Tombigbee’s will enable “rural America to participate in the American dream,” said Perdue.

Pointing to broadband’s important role in supporting telemedicine, distance learning, precision farming and other applications, Perdue said “broadband is not a luxury; it is a necessity so [everyone] can enjoy prosperity.”

Freedom Fiber Broadband
Tombigbee, which offers broadband under the Freedom Fiber brand, aims to deploy broadband throughout 1,000 square miles of rural Alabama where many people do not have broadband available to them at the minimum recommended speeds, explained Foshee. After conducting a feasibility study showing the entire project would cost about $40 million, the company divided the project into five phases.

As Foshee explained, “The first phase was the easiest fruit to pick” and the company decided to take the project further only if Phase 1 was successful. Phase 1, which has already been undertaken, included two towns with a combined population of about 13,000 and surrounding areas and required an investment of $8 million.

“When we were halfway through Phase 1, the numbers were coming in so strong, the board voted to authorize Phase 2,” said Foshee.

The USDA grant is for what would have been Phase 4 or Phase 5 – an 80-square mile area between four towns that includes 450 families and where 78% of those families already have completed a form on the Tombigbee website to say they would purchase service when available.

Another notable aspect of the Tombigbee broadband project is that the company was successful in persuading some of the towns covered to foot a portion of the costs. Representatives of Tombigbee met with mayors and explained that the economics could only justify deployment in the towns but that if the town would raise additional funding, the company would extend service to outlying areas.

An Articulate Advocate
Foshee is an articulate advocate for the importance of broadband in rural areas.

At the announcement event and in the Telecompetitor interview, he outlined four key benefits, which he clearly is accustomed to repeating frequently, yet still delivers enthusiastically:

While some electric cooperatives undertake fiber deployments primarily to support smart grid initiatives and decide to investigate providing broadband service as an ancillary option, Foshee said “we took the opposite approach – we went to the human side first.”

Tombigbee is now looking into using the broadband network it is planning to also support modernization of the electric business. In addition, the company is exploring other grant opportunities.