Cox Communications will double the speeds of two services – ConnectAssist and Connect2Compete—from 50 Mbps to 100 Mbps on March 31. The cable company also said that it is participating in the federal government’s Affordable Connectivity Program (ACP).

More than 500,000 are enrolled in the two Cox programs and will receive the higher speeds at no additional costs, Cox said.

The ACP provides $30 towards broadband service for low-income households. The amount is $75 on tribal lands. Cox said that applying the $30 allowance will enable more subscribers to get the 100 Mbps service for free. ACP also provides as much as $100 toward the purchase of devices provided that the households spend between $10 and $30 of their own money.

“We’re committed to the Affordable Connectivity Program as it aligns with our values and digital equity strategy to offer greater access to more people,” Cox Communications president Mark Greatrex said in a press release about Cox Affordable Connectivity Program participation. “It’s a powerful example of how public and private partnerships can ensure [that] households of all economic statuses can unlock the possibilities that high-speed broadband has to offer.”

Other operators are participating in ACP.

This week Verizon said that its Fios Forward program – which is an element of its Citizen Verizon initiative – would participate in ACP. The carrier will offer symmetrical speeds starting at 200 Mbps to subscribers whose applications for ACP have been approved and who have Fios Mix & Match plans. Those in the program also have the option of using the funds toward other services.

Also this week, Mediacom said that its Connect2Compete Plus program will double in speed from 50 Mbps to 100 Mbps. The offering, the company said, is “designed to work in conjunction with” ACP.

In early February, AT&T said that its new ACP-based free Internet plan will offer 100 Mbps connectivity to qualifying subscribers. That offering is in addition to older plans that offer 10 Mbps for $5 to $10 per month. Alternatively, the ACP funds can be used toward prepaid or Cricket Wireless plans. 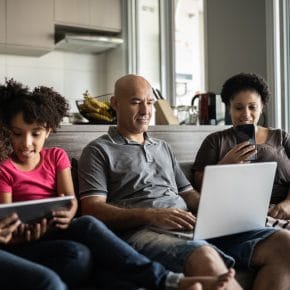