Home » Cisco Gets in On Tablet Momentum with Cius, Targets Enterprise 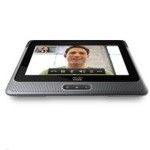 The new Cius wireless tablet to be available from Cisco by early next year, has drawn numerous comparisons to Apple’s iPad, but Cisco prefers to view the products as complementary.

According to press reports from the Cisco Live event where the product was launched this week, Cisco CEO John Chambers said, “Cius is all about collaboration and telepresence. It’s a business tablet.” The iPad, on the other hand, targets consumers.

Nevertheless Cius is a personal wireless device, making it a major departure for the networking giant. Cisco calls it “a first-of-its-kind mobile collaboration business tablet.” The company also refers to the device, which weighs a little over a pound, as “ultra-portable.” The product works with either Wi-Fi or 3G cellular networks. Support for 4G is planned for the future.

The Android-based product has a seven-inch high-resolution widescreen and two built-in cameras (one front facing and one rear-facing) to support videoconferencing. Cisco uses the term “telepresence” rather than videoconferencing. But some might quibble with that, as the term “telepresence” traditionally refers to a system that displays people in life size so that they appear to be seated at the same table as conference participants located a world away. Cius does, however, interoperate with Cisco’s large-scale telepresence equipment.

In addition Cius works with a wide range of Cisco collaboration applications including Cisco Quad, Cisco Show and Share, Cisco WebEx Connect, Cisco WebEx Meeting Center, and Cisco Presence. Cisco said customer trials of Cisco Cius will begin in the third quarter of calendar year 2010, with general availability in the first quarter of 2011.

“Cisco Cius epitomizes how the network is changing the way we live, work, learn and play,” said Tony Bates, Cisco senior vice president and general manager, enterprise, commercial and small business. “This platform can transform how healthcare professionals advance patient care; how retailers deliver service experiences to consumers, or how universities deliver world-class education to their students. Best of all, Cisco Cius offers IT functions a way to dramatically lower the cost-per-user of provisioning those new experiences.”