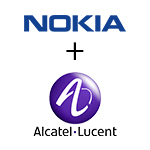 Word that Nokia and Alcatel-Lucent were close to a merger agreement has proven true. The two companies today announced “their intention to combine to create an innovation leader in next generation technology and services for an IP connected world.” The combined company will be called Nokia Corporation, with headquarters in Finland and a strong presence in France, today’s announcement press release noted.

Risto Siilasmaa, current Nokia chairman, will be the chairman of the merged company and Rajeev Suri, current Nokia president and CEO, will be CEO. The combined company’s Board of Directors is planned to have nine or ten members, including three members from Alcatel-Lucent, one of whom would serve as vice chairman.

According to an email sent to Alcatel-Lucent employees obtained by Telecompetitor, the combined company will gain the “number one or number two position in each of the technologies that matter in our industry.”

The merger, which requires regulatory approvals, is expected to close in the first half of 2016.

The Nokia/ Alcatel-Lucent Merger Plan
Commenting on the merger plan in today’s release,  Suri said: “Together, Alcatel-Lucent and Nokia intend to lead in next-generation network technology and services, with the scope to create seamless connectivity for people and things wherever they are. Our innovation capability will be extraordinary, bringing together the R&D engine of Nokia with that of Alcatel-Lucent and its iconic Bell Labs. We will continue to combine this strength with the highly efficient, lean operations needed to compete on a global scale.”

According to the internal memo, the Bell Labs brand is expected to be retained to “host the new company’s networks-focused innovative activities.”

The Alcatel-Lucent internal memo referred to the merger as “the next logical step of our Shift Plan.” The first chapter of that plan, the memo said, was “about restoring the competitiveness of our company through our restructuring, refinancing and refocusing efforts.” The second chapter was “the definition and launch of our innovation, transformation and growth strategy.”

The memo also noted that the merger will give Alcatel-Lucent “the financial strength to build a successful and sustainable future.”

Combined, Nokia and Alcatel-Lucent spent 4.7 billion euros (~$4.98 billion) and employed over 40,000 in R&D in 2014. The combined company “will be in a position to accelerate development of future technologies including 5G, IP and software-defined networking (SDN), cloud, analytics as well as sensors and imaging,” according to today’s press release.

Company managements cited the benefits of the merger with regard to the fast emerging Internet of Things (IoT): “The combined company will be uniquely positioned to create the foundation of seamless connectivity for people and things wherever they are. This foundation is essential for enabling the next wave of technological change, including the Internet of Things and transition to the cloud.”

The two companies also fit well when it comes to technology and geography, today’s press release noted. The merger “will also bring together the best of fixed and mobile broadband, IP routing, core networks, cloud applications and services,” the release said.

Financial Details
Other key facets of the merger put forth include: