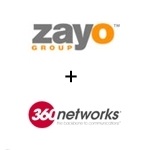 Zayo continued its aggressive acquisition strategy today with the news that they will acquire Seattle, Washington based 360networks. Financial terms were not disclosed.

“The combination with 360networks marks a new chapter for Zayo, one in which we emerge as a national provider of Bandwidth Infrastructure services” said Dan Caruso, President and CEO of Zayo Group in a press release “The near doubling of the network allows us to provide a greater range of solutions, both in terms of markets served and ability to interconnect services across the markets.”

In addition to wholesale bandwidth services, 360networks also operates a wholesale VoIP service. Zayo will spin off that voice business line to its Onvoy Voice Services unit, which was established to offer wholesale voice services.

In addition to its own 24,000 route mile fiber network connecting 153 markets across 31 states and Washington D.C, Zayo has approximately 4,400 buildings and 2,000 cell towers on-net, and over 170,000 square feet of colocation space. 360networks already operates in 24 Zayo markets. The combined companies will operate a 42,000 route mile fiber network, giving Zayo a much more defined national network.

The deal illustrates continued investment and M&A activity in the fiber transport, wholesale, and enterprise sectors. Zayo has been quite active in this regard.