LOUISVILLE, CO–(Marketwire – Mar 5, 2013) – Zayo Group announced it has deployed a native 100G Wavelength network on its Memphis to Chicago route. The Memphis to Chicago network route was previously only available to Dark Fiber customers and, with this upgrade, Zayo is now able to expand its Bandwidth Infrastructure services to include Wavelengths and Ethernet between these two markets.

Zayo strengthened its position in the Southeast region with last year’s acquisition of USCarrier. The USCarrier assets provide Zayo with fiber-based solutions in southeastern states, including Georgia, Florida, Alabama and Tennessee.

“This is another key piece of our previously announced nationwide 100G Wavelength Network rollout and makes a unique fiber path available to our lit services customers,” says Zach Nebergall, Vice President of Zayo’s Wavelength Product Group. “With Zayo’s recent organic and inorganic growth in the Southeast, we can meet a broader set of customer demands for Bandwidth Infrastructure services with end to end connectivity.”

The project was completed in early 2013 with its first Wavelength customers activated on the network as of mid-January. 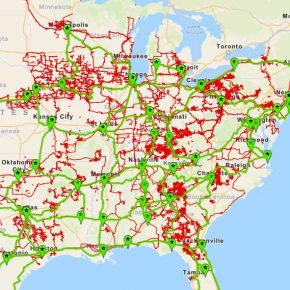