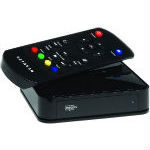 Netgear is offering a way for those who own a TV with an HDMI port to turn their sets into connected TVs. The San Jose-based home networking company announced the launch of the NETGEAR NeoTV Streaming Player (NTV200) today.

Priced at $79.99, the NeoTV Player will be available later this month. Pre-orders are being taken now from major retailers and online stores, according to Netgear.

Buyers can access the Internet via built-in high-speed Wi-Fi, or through an Ethernet cable. Also built-in is optical audio out (S/PDIF) for high-quality surround sound. Customers can use their smartphones to control and navigate through viewing and search options, while those without a smartphone can use NeoTV Player’s remote control.

The player’s free app provides access to streaming movies and TV from Netflix and hundreds of 1080-pixel HD new movie releases from Vudu, as well as all that’s available on YouTube, according to the press release. Also on offer are additional channels, including Pandora, Napster, Picasa, blip.tv, Crunchyroll and Revision3, among others.