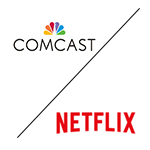 Comcast and Netflix intend to expand their interesting business relationship, highlighting a shifting video landscape. Comcast integrated Netflix into their X1 operating system back in 2016 and now plans to offer “[n]ew and innovative Xfinity packages, including a Netflix subscription.”

The relationship is going well. Comcast revealed that nearly 50% of X1 customers are actively using Netflix on the platform. The X1 platform is in 60% of Comcast homes, which by my math equates to roughly 13.4 million homes.

Additionally, Netflix is among the top voice commands and On Demand services on the X1 platform. In short, Comcast subscribers really like Netflix.

Details of the new promotions were not provided, but they will include “[a] variety of initial offers this month that include a Netflix subscription,” says a Comcast press release. These offers may vary by geographic market and will be open to both new and existing Comcast subscribers, according to the company. Comcast will also handle Netflix billing for this expanding relationship.

“Netflix offers one of the most popular on demand services and is an important supplement to the content offering and value proposition of the X1 platform,” said Sam Schwartz, Chief Business Development Officer, Comcast Cable in the press release announcing the deal. “Netflix is a great partner, and we are excited to offer its services to our customers in new ways that provide them with more choice, value and flexibility. The seamless integration of Netflix with the vast Xfinity entertainment library on X1 present a unique and comprehensive experience for customers.”

A Complicated, Yet Expanding Relationship
Comcast and Netflix have been cozying up ever since the 2016 debut of Netflix on X1. Early last year, Comcast added a free Netflix preview to their annual video-on-demand Watchathon promotion, a practice that has been extended to this year.

Recent research from Parks Associates reveals the important sales channel relationship legacy pay-TV providers like Comcast have become to Netflix. Just over 20%, or one in five, of pay-TV subscribers also subscribe to OTT services like Netflix through their pay-TV provider.

The expanding relationship between Comcast and Netflix demonstrates the shifting video business landscape. In the not too distant past, Comcast and Netflix weren’t as friendly. They were involved in a high profile peering/interconnection dispute, which was eventually settled in 2014.

Netflix has managed to evolve from a once perceived threat to pay-TV providers to a valued partner. Many cable MSOs beyond Comcast have similar partnerships with OTT pioneer.