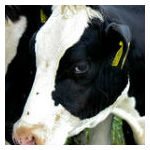 Wireless technology and Internet data connections are finding their way into more and more agricultural applications. One application that illustrates the kinds of things that are now possible is livestock tracking.

The state of Michigan is using the technology to help prevent the spread of bovine tuberculosis, which was transmitted to cattle in part of the state via deer. The state now requires all cattle delivered to slaughterhouses to be fitted with RFID ear tags. The slaughterhouses all have RFID readers and a data connection, which are used to gather information from each animal and transmit it to a central database managed by the state. Using the information in the database, state officials can easily identify the origin of any cattle found to have TB.

In the Michigan example, individual cattle raisers aren’t required to have readers or any type of wireless or broadband connection. But for farmers that do have a way to read the tags and share that information, the same technology also can support other applications, as Dan Buskirk, associate professor of animal science at Michigan State University, explained in a recent interview with Telecompetitor.

The average cow or calf producer in Michigan has only 16 head of cattle, Buskirk noted. But out west he said some large feedlots have 200 or 300 cattle to keep track of – and RFID tags and readers combined with a data connection can help with that. Using an application called CowSense from Midwest MicroSystems, Buskirk said farmers can collect data about their herd and then send it over a data connection to a central database, where it is compared with cattle belonging to the entire CowSense user base.

“They give you back a benchmark showing how you stack up compared to everybody else,” explained Buskirk.

Another livestock-tracking application, called ScoringAG, is designed to enable farmers to obtain advice about their herd in real time. As Scoring AG President William Kanitz explained, a farmer can scan the RFID tag of a cow that appears sick and via a data link, can pull up the animal’s history along with information about the appropriate treatment for the animal.

ScoringAG delivers its offering through a third-party data center operator and uses several of the operator’s data centers.

Future directions
At a time when many metro dwellers are becoming increasingly interested in where their food comes from, Michigan State University recently leveraged Michigan’s mandatory RFID tags to label meat delivered to school kitchens with information about the animal’s origins. As the animal is harvested, information from the RFID tag is transferred to barcodes, which are used to label the beef from that animal, Buskirk explained.

“The barcode traces the meat back to the animal and can be scanned with a smartphone to bring up information about where it came from and was processed,” said Buskirk.

Not all farmers are open to the idea of other people keeping tabs on their livestock, however. A few years ago, the U.S. Department of Agriculture attempted to create a nationwide livestock database, which as Buskirk explained, might have helped detect any disease outbreaks more quickly. Some farmers were concerned, though, that privileged information might fall into the hands of competitors and they succeeded in halting the initiative.

One of the next steps may be a shift toward ultra high frequency RFID technology that can read information from multiple animals at the same time, Buskirk said. This would be an improvement over today’s technology that requires animals to walk in a single file past the reader.

When coupled with sensors that can read an animal’s vital signs, UHF tag reading technology could pave the way for some other useful applications. Kanitz envisions a day when a cow’s RFID tag will automatically alert the cow’s owner that the cow isn’t feeling well.

Other agricultural apps
Livestock tracking is just one of a wide range of wireless agricultural apps that have emerged in recent years. Several months ago Telecompetitor covered the Yellow Box application that leverages WiFi to enable truck drivers to stay inside their vehicles while loading grain. We also touched on a few other agricultural wireless apps, including apps that predict corn yields or use telematics to remotely connect owners and managers to their equipment.

As a result of writing that story, I recently received an email about the second annual IDEAg Interconnectivity Event scheduled for June 26 and 27, 2013 in Altoona, Iowa. I don’t think I’ll be able to attend but thought I would pass the information on to readers, as the show was created specifically to focus on how today’s telecommunications networks can benefit the agricultural industry.