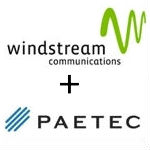 Windstream is up to their own M&A tricks again with news today they are acquiring Fairpoint, NY based CLEC PAETEC in a transaction valued at approximately $2.3 billion. Windstream will issue stock worth $893 million and assume $1.4 billion in PAETEC debt to close the transaction.

The move continues an ongoing transition of Windstream from a rural focused ILEC to a nationwide enterprise data and broadband focused integrated communications carrier. After the close of this deal, Windstream reports 70% of its revenue will come from business services and broadband.

“This transaction significantly advances our strategy to drive top-line revenue growth by expanding our focus on business and broadband services,” said Jeff Gardner, president and CEO of Windstream in a press release. “The combined company will have a nationwide network with a deep fiber footprint to offer enhanced capabilities in strategic growth areas, including IP-based services, data centers, cloud computing and managed services.”

With the PAETEC acquisition, Windstream gains business customers in 46 states and seven additional data centers. The new combined company will now control a 100K route mile fiber backbone, 37K of which is currently controlled by PAETEC.

Windstream’s M&A team has been quite busy the past few years with significant acquisitions including Hosted Solutions, Q-Com, Iowa Telecom, and NuVox, among others. Unlike their tier 2 brethren, Frontier and Fairpoint, who have both grown significantly through single rural access line acquisitions (both of which happened to come from Verizon), Windstream is completing several transactions to grow scale and diversify well beyond its rural market roots. In fact, after the PAETEC close, Windstream can really no longer be considered a rural ILEC.

PAETEC has been on an acquisition binge of their own as well. They recently acquired Cavalier Telecom and Xeta, among others. Their merger with McLeod back in 2007 laid the foundation for their aggressive nationwide CLEC growth.

The deal still needs customary approvals from state and federal regulators and from the board of PAETEC.

One thought on “Windstream to Acquire PAETEC”