Windstream is at it again, proving its acquisition spree is not over. The latest candidate – Q-Comm, an Overland Park, Kan based regional fiber transport company and CLEC, with operations in 22 states. The transaction is valued at $782 million, which Windstream will fund through a stock issuance valued at $237 million, $278 million in cash, and will assume $267 million in Q-Comm debt.

Q-Comm has two main subsidiaries – Kentucky Data Link (KDL) and Norlight. KDL operates a regional fiber network of 30K route miles across 26 states (KDL quotes 26 states, Windstream quotes 22), counting wireline and wireless carries, as well as enterprise businesses as customers. Norlight is a CLEC with approximately 5,500 small and medium business customers across the Midwest. The combined companies have about 600 employees. 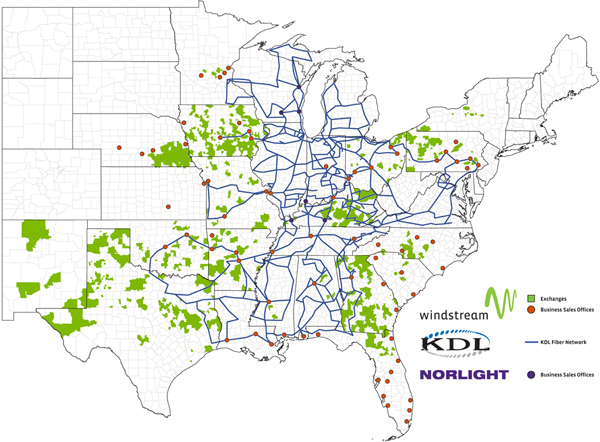 Windstream seemed particularly interested in KDL’s growing wireless backhaul business. “In order to maximize the long-term business potential and value of the acquired properties, Windstream plans to increase success-based capital expenditure investments in the near term. These investments will be concentrated in the wireless backhaul and enterprise businesses and will be driven in part by the significant number of contracts recently awarded to KDL.”

Even though Windstream lacks their own wireless network, they appear to be trying to grow their wireless business through wireless backhaul. It’s a strategy more wireline companies who lack wireless assets are doing. After all, in most cases, wireless traffic spends most of its time traversing a wireline network. Companies that own those wireline assets stand to gain from the explosion of wireless traffic.