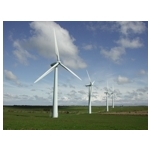 With mobile broadband traffic doubling in the last three years, 1,000-1,200 more cell phone towers are expected to be added to California’s existing count of 3,500 during the next five years. This, coupled with some of the most ambitious renewable energy legislation in the 50 states and the likelihood of persistently high fossil fuel prices, has led California cell tower specialist Core Communications Group to partner with small-scale wind turbine innovator Helix Wind to test the ability of the latter’s small wind turbines to generate power for cell towers in Southern California.

Core will work with Helix on behalf of Vertical Green– a cell tower company — to have two small wind turbines by early next year. Connected to the grid and expected to run from one to three months, the demo will be one of the first of its kind, according to a news release.

The partners also intend to explore the feasibility of selling power back to the electrical grid operator under a power purchase agreement.

“Helix remains committed to developing innovative solutions that can power cell phone towers with wind power,” San Diego-based Helix Wind CEO Ian Gardner said in the news release. “We are actively pursuing opportunities in this space, and are excited to be working with Core Communications on a test so close to home.

“Even grid connected cell phone towers can benefit from renewable energy, and wind power can dramatically reduce the emissions and carbon footprint associated with them. Under the right conditions, the towers may even be able to produce surplus energy, providing an additional revenue stream to tower owners. We look forward to getting started on the test.”

Potential cost savings, reducing environmental impacts and associated zoning challenges, and the possibility of producing revenue as well as clean, renewable power, are also on the minds of folks at Core Communications apparently.

“Core Communications is committed to reducing the total cost of ownership for our wireless carrier clients as well as solving zoning challenges which may encumber 4G network deployments,” Core chairman Keith Pinter said. “We are excited about managing this deployment for highly innovative tower company Vertical Green, and following this proof-of-concept stage, we will explore advancing our relationship with Helix into a full roll out.”