Home » Will the iPad Help Close the Broadband Gap? 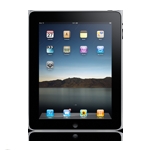 Arguments I hear from broadband carriers about broadband adoption rates, or lack thereof in certain communities,includes the fact that many people lack a computer at home and some people simply don’t want/need broadband. Pew Research supports one of these assertions with their latest market research on Americans and Their Gadgets, reporting 76% of Americans own a computer (laptop or PC).

So, based on this data, 24% of Americans don’t have a computer and thus probably don’t need broadband, right? That may not be entirely true anymore, because the way we access the Internet is changing rapidly, and the computer may not be the main source of access for much longer.

This phenomenon is happening much more quickly in lesser developed economies, where average people can’t afford a computer. For them, the cell phone is their main source of access. Within the U.S., other gadgets are growing rapidly as a source for Internet access, including smartphones, and most recently, tablet computers, which are currently best represented by the Apple iPad.

We’ve discussed earlier how the iPad may now well be the fastest adopted consumer electronic product in history, with 50K being purchased everyday. Its impact is cutting into traditional computer sales, particularly netbooks. It’s not a hard leap to assume that some, maybe many, of those 24% of people who currently don’t own a computer, may make the leap to a tablet, bypassing the PC entirely. After all, the iPads’ popularity is not just among geeks and the young.

Its ease of use and multimedia and broadband centric experience may help move the needle for broadband adoption among the current crop of broadband non-believers. It might be worth some experimentation by carriers who are looking to entice customers who have chosen not to subscribe to broadband just yet. Indeed, the iPad (and overall tablet computer segment) is a trend that deserves much attention.

5 thoughts on “Will the iPad Help Close the Broadband Gap?”