Home » Will TabletTV Be Any Less Disappointing Than Other Mobile Broadcast TV Offerings? 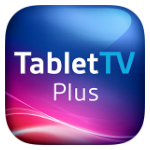 The developer of a small tuner/ digital video recorder (DVR) and app designed to enable a wireless tablet to receive broadcast TV signals has begun to take orders for the offering, known as TabletTV Plus. The launch raises the question of whether market response to the product will be any less disappointing than it was for similar mobile broadcast TV offerings in the past.

TabletTV Plus retails for $89.95 and comes from a joint venture of Motive Television and Granite Broadcasting Corp., also known as TabletTV. The user installs an app on his or her tablet in order to use TabletTV and can then view local TV broadcasts at no charge, with signals picked up through the Tpad tuner/antenna, thereby avoiding cellular usage charges. The tuner communicates with the tablet using its own built-in Wi-Fi.

Additionally the product can be used to cast content to television screens via Google Chromecast and Apple TV Airplay.

And wherever the user has Internet connectivity, the offering makes it possible to experience “everything that television and the Internet have to offer in a single place,” the developers note in a press release.

One advantage that TabletTV has in comparison with both of these offerings is that it doesn’t require dedicated spectrum. Both MediaFLO and Dyle did. Qualcomm owned the spectrum underlying MediaFLO, which has since been sold to and re-purposed by AT&T, while Dyle TV uses spectrum controlled by broadcasters that was freed up through the digital TV conversion.

Broadcasters had to make an infrastructure investment to support Dyle. But as the TabletTV spokesperson explained in an email to Telecompetitor, TabletTV requires no investment on the part of broadcasters. It picks up the same signals that are broadcast to traditional TVs and therefore, it also does not require its own content licensing.

“We will be bringing the broadcasters more eyeballs and it costs them nothing,” commented the TabletTV spokesperson.

The spokesperson also noted that “what TabletTV is doing… is bringing viewers back into the ‘tent’ for the broadcasters; i.e., we’re bringing back viewers who want to enjoy live broadcast TV on their tablets wherever they go – but hadn’t been able to until now.”

Another important capability of TabletTV is that its app anonymously captures the media behavior of tablet users as they watch or record live broadcast TV, interact with advertisements and surf the web, the spokesperson noted.

Clearly TabletTV developers appear to have learned from previous mobile broadcast TV offerings, and the offering would appear to have a better shot at success than its predecessors. The product might be of interest to broadband providers as a means of augmenting their over-the-top video offerings – or perhaps even acting as a stand-in for a video offering. Nevertheless, TabletTV will face some significant challenges.

It comes to market at a time when tablet sales are softening and despite a rise in cord cutting, pay TV continues to have a much larger market share than broadcast TV does. And ironically, the ability to avoid data usage charges also has less value than it would have just days ago, now that T-Mobile this week said it will give customers the ability to stream video content and not have it count against their data allotments.