Home » Will Apple Capture the Connected TV Market Too? 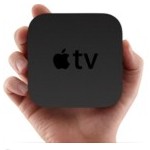 Apple may well run away from prospective competitors in the connected TV player market, just as it did with digital music, smartphones and tablets, says Jia Wu, the senior analyst for Strategy Analytics’ Connected home Devices service.

Internet set-top boxes offer consumers one of the easiest ways to view Internet content on TV screens. And though Apple “still considers [this market] a hobby,” it’s one that’s growing. More than 8% of US households own an internet set-top box as compared to 7% of European households, according to Strategy Analytics’ “Connected TV Players: Another Battlefield in the Smart TV War”.

The second generation Apple TV and Roku Box are lower priced than their predecessors, which is helping drive demand. More good news for Apple, Strategy Analytics also found that Apple TV users are spending more money on movies and TV shows: 30% of Apple TV owners rented movies or TV shows as compared to 20% of users of other devices.

Wu had a word of caution for those interested in competing in the Internet TV player market. “Apple is leading this nascent market, which it still considers a ‘hobby’…

“As Apple prepares for its expected launch of smart TVs in 2012, rival platforms must accelerate their development plans to keep Apple from running away with the connected TV business, as it has done in smartphones and digital music.”