5G and smart cities could have a lot of synergies, as research firm Kagan explains in a new research note. Researchers drew on Verizon’s experience in the first four markets where the carrier will deploy fixed 5G wireless, but their observations could apply to mobile 5G as well.

“Between tearing up streets to lay fiber and installing small cells on municipal infrastructure, city cooperation is essential for 5G deployment – and that is the most prominent similarity between the four cities chosen by Verizon for its initial 5G launches,” wrote Kagan, part of S&P Global Market Intelligence.

Of the four major U.S. wireless carriers, AT&T and Verizon initially plan to deploy 5G in millimeter wave bands, while T-Mobile and Sprint plan to use lower-frequency spectrum. But ultimately all carriers deploying 5G are likely to want to use millimeter wave spectrum – in metro areas, at least — as they will want to maximize the speeds they can offer.

Verizon expects to launch its 5G fixed wireless service before the end of 2018. AT&T has said it will offer mobile 5G wireless this year, but that service will be supported by a 5G hotspot as smartphones will not be available until 2019.

5G and Smart Cities
Kagan researchers pointed to Verizon’s agreement with the city of Sacramento as an example of the kind of 5G and smart cities synergies that we may be seeing more of.

Verizon agreed to invest $100 million to support the city’s smart grid initiatives in exchange for being able to use city conduit for fiber deployment, for discounted utility pole attachment fees and for small cell lease terms that were favorable to the carrier.

“Whereas Sacramento and other cities typically issue a request for proposal for services and then pick a bidder from the bunch, Verizon approached Sacramento directly and offered a nonexclusive partnership,” Kagan noted.

Verizon’s agreements with its other three 5G launch cities – Los Angeles, Houston, and Indianapolis – were unique but all involved similar give-and-take agreements, according to Kagan. 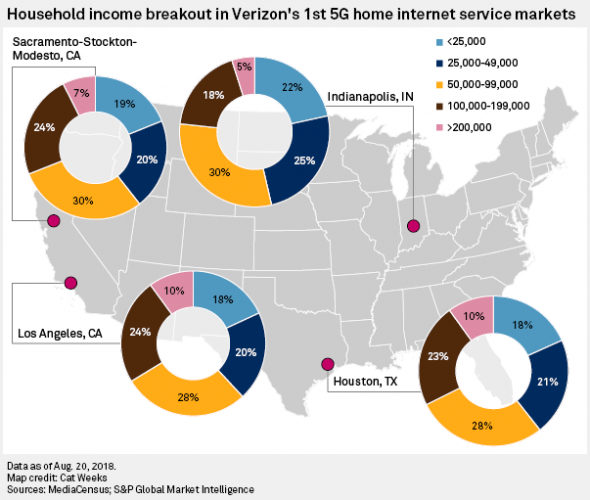 In comparing the initial four Verizon 5G markets, Kagan noted that all four cities have broadband penetration rates of 72% or higher and that nearly one-fifth of the population in all four cities have incomes below $25,000 annually. This suggests that the price Verizon charges for its fixed 5G service could be critical in gaining market share.

Incumbent carriers in the four markets include AT&T, Comcast and Charter.